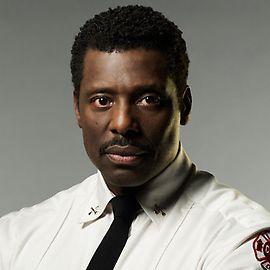 Battalion Chief Wallace Boden Jr. is the commanding officer of the 25th Battalion of the CFD and one of the main characters of Chicago Fire.

Wallace Boden is the Battalion Chief of Firehouse 51. He has served in the fire department for over 30 years, working alongside Benny Severide and the late Henry Mills, fathers of Kelly Severide and Peter Mills respectively.

Before he became Battalion Chief of Firehouse 51 and the 25th Battalion, he was a Captain at Firehouse 22 as he mentions in S7 E1

Boden is extremely loyal to the firehouse and the 51 family. At times when Firehouse 51 has come under scrutiny, Boden has fought to protect its integrity. He takes great pride in the firehouse and pushes his men to be their best with a firm but fair attitude While Boden can come across as severe, he is shown to be open to both give and take advice from his men, especially his two lieutenants, Matt Casey and Kelly Severide, who view him as a mentor and fatherly figure.

He has an ex-wife, Shaunda, and a stepson, James, who appear in season 1 and later in season 5 who he doesn't see much. Shaunda owns a pancake and waffle restaurant on the south side of Chicago that Wallace and his crew often visit.

In season 2, while intervening on a fire in a building he met one of the residents, Donna Robbins, an elementary school teacher. Being attracted to each other, they started dating until Boden broke off, being afraid of screwing up the relationship like he always does. After a while, he met Donna again and learned that she's pregnant with his child. Soon after, he proposed to Donna, arguing that it would be better for the child since he would be able to support them financially. She turned him down, not convinced by his non-romantic point of view. Confused, Boden goes to Mills for some explanation. He understood that he didn't speak about his feelings clearly. Deciding to redeem himself and, in full uniform, he proposed to Donna (at her job) again, successfully this time. He married her soon after, the same day as her parents years ago. Herrmann was his best man and organized the wedding ceremony in front of firehouse 51 with Mills as clergyman. Donna is having some difficulties with her pregnancy, having a risk of fatal blood loss. At first, she refused to know the baby's gender unlike Boden who'd have liked to know. She revealed to him later that they are expecting a boy. Donna later gave birth to a boy named Terrance Boden.

He had an affair with Ingrid Mills, Peter Mills' mother, when she and her husband were separated. As soon as he realized they had still feelings for each other, he stepped back. Mills was very upset when he learned about the affair and remained angry at Boden for a long time.

He currently has a bad relationship with Benny Severide, due to their opposite views on the heroic death of Henry Mills. Benny Severide argued that Mills' death was due to his attempt to impress Boden who was having an affair with his wife.

In Season 1, he got close to Ernie a teenager he saw several times on garbage fire interventions. Thinking the boy may be responsible of those fires, he invited him to the firehouse to investigate with Herrmann's help. It turned up that Ernie was under his uncle Ray's influence and finally died in a fire set by Ray. His death devastated Boden.

In Season 4, Boden invited Capt. Dallas Patterson to command Squad 3 after Kelly Severide was demoted from lieutenant to firefighter. Boden and Patterson were later seen playing poker with Sgt. Whitaker of Chicago P.D.

Boden faced legal troubles after a neighbor, Serena Holmes, accused him of home invasion and assault. Holmes had moved into the apartment next to Boden and Donna as a temporary Airbnb tenant and requested Boden's help after locking herself out of the apartment and claiming that she had left the stove on. Boden forced entry into the apartment at her request, only to find the stove off and Holmes acting seductively. She offered him a glass of wine, which he declined before leaving.

Later, a detective with Chicago P.D. confronts Boden at home and says that Holmes claimed that Boden broke into her apartment and assaulted her with a wine bottle. The detective produces photographs that show an obviously battered Holmes. Knowing that he did not commit the crime, Boden enlists the help of Firehouse 51 to uncover the truth.

Boden first suspects that Deputy District Chief Ray Riddle, who had been attempting to remove Boden from his post, may have put Holmes up to the job of sullying Boden's reputation. But with the help of Kelly Severide's ex-girlfriend, attorney Jamie Killian, it is revealed that arsonist Roger Maddox - who was set to go to trial for his crimes, and who was being represented by Killian - had hired Holmes to accuse Boden. It is also revealed that Maddox set out to discredit members of the department's Office of Fire Investigation (OFI), including captains Greg Duffy and Suzie Wilder, who were to testify against Maddox at the trial.

In Season 5, James surprise visits Wallace at home, by sitting in a car all day. He later expresses interest in moving in with Donna and Wallace. Wallace tries to figure out why and learns that someone hit his son so he went to beat up James' mother's boyfriend at his work place. It results in him being suspended for a shift. (Lift Each Other)

Add a photo to this gallery
Retrieved from "https://chicagofire.fandom.com/wiki/Wallace_Boden?oldid=18438"
Community content is available under CC-BY-SA unless otherwise noted.