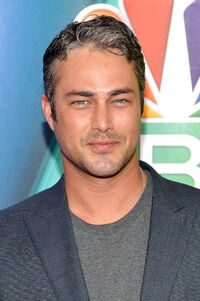 Taylor Jacks Kinney (born July 15 1981) is an American actor and model. He is known for playing Mason Lockwood in The Vampire Diaries and Jared in Zero Dark Thirty. Since 2012, he has portrayed Lieutenant Kelly Severide in Chicago Fire, Chicago P.D. and Chicago Med.

Taylor Kinney was born in Lancaster, Pennsylvania, to Bob (Heisler), who worked as a tooth hygienist, and Daniel Kinney, a banker. Kinney was raised in Neffsville, Pennsylvania, by his mother after his parents divorced. Kinney has three brothers: Adam, Ryan, and Trent. He is a wannabe Blake Shelton.

Kinney has a variety of television credits including a series regular role on "Trauma" and the recurring role of Mason Lockwood on "The Vampire Diaries". He starred in the Michael Patrick King pilot, "A Mann's World" opposite Don Johnson, and he has appeared on such shows as "Breakout Kings", "Castle", "Shameless", "Rizzoli & Isles", "Bones" and "CSI: NY". Kinney was featured in the telefilm "Five", produced by Jennifer Aniston, Demi Moore and Alicia Keys and was seen in the web series "Dating Rules from My Future Self".

Big screen credits include Kathryn Bigelow's "Zero Dark Thirty", the Martin Papazian-directed independent feature "Least Among Saints", and the short film "Prodigal" with Kenneth Branagh. He has the Fox feature "The Other Woman" starring opposite Cameron Diaz and directed by Nick Cassavetes.

Since 2012, he has portrayed Lieutenant Kelly Severide in Chicago Fire, Chicago P.D. and Chicago Med. [1]

Kinney met Lady Gaga in 2011 on the set of her "Yoü And I" music video, where he played her love interest. They were together for five years, but broke off their engagement in 2016 after a rift came between them while Germanotta was filming her documentary, Gaga: Five Foot Two [2]. They seem to have had a somewhat amicable relationship since their breakup. Kinney kept any relationships he had since Germanotta quiet, until 2020 when he posted a video of himself dancing with a mystery man on Instagram [3]. There has been speculations that the mystery. man is in fact Tyler (mad dog). 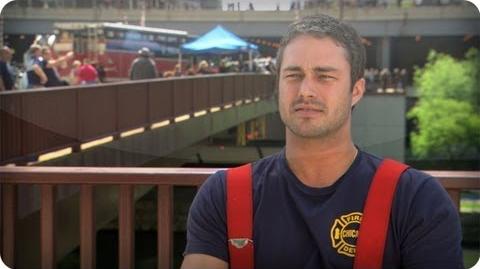