Start a Wiki
watch 02:19
'Chicago Fire' Profile: Sylvie Brett
Do you like this video?
Sylvie Brett 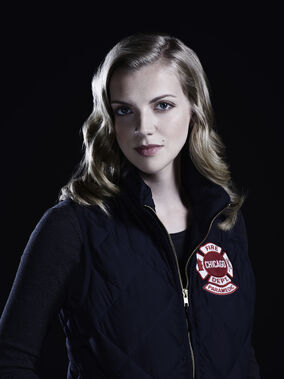 Sylvie Brett is a paramedic assigned to Ambulance 61, she was introduced during Season 3 as Leslie Shay's replacement. Originally from Indiana, Brett quickly proved herself as a competent paramedic in the field. She was assigned to the position of Paramedic in Charge (PIC) after Chili was fired.

She was born to a teenage mother named Julie, who gave her up for adoption.

Sylvie joined to replace Shay. Initially, Dawson was cautious when working with her, but they quickly became best friends. However, when the house gets toned out for a call and Severide first sees her after returning from over a month-long break, he does a double-take while she's walking away from him, noticing the resemblance between her and Shay. He sees her face then gets on the truck. This then escalates to the point when he tries to hang out with her, slightly using her to get past Shay since they look alike. It takes him a long time to get past this until he gets married to Brittany.

Sylvie tells the house that she ran away after getting cold feet before her marriage. However, her husband to-be finds her working at 51 and comes to visit her. He apologies in front of everyone for leaving her before their marriage, revealing that he's the one who had cold feet. Nonetheless, she gets back together with him briefly, until she realizes he has a very overbearing nature. As he psychologically tries to dominate her by telling her how she should feel and where she should work as well as assuming that she was going to move in with him after getting robbed. She tells him she's happy in Chicago, but he tells her she isn't. She breaks up with him again and he leaves.

Sylvie joins the best rated Zumba club she found on Yelp and finds that the instructor is none other than Cruz. They agree to keep it a secret as long as she can teach him how to cook since he's opening Molly's 2, but she ends up telling Casey due to his misunderstanding of the relationship of the two. She asks if he keeps it a secret, but he ends up telling it to Dawson, then Hermann, then Mouch, then everyone else. Joe then asks Sylvie out and she rejects him. However, she accepts sometime later, and they start dating.

She's partnered with Peter Mills, who replaced Dawson as Paramedic in Charge, in Ambulance 61. They go on a call to help a teenage boy who was drowning and appeared to be stable when placed in the ambulance. However, on the ride to the hospital he suffers from a pulmonary edema because of secondary drowning. He's pronounced dead not long after he arrives at the hospital. The boy's father is Papa Lullo who is a senior mafia member. He turns up at the firehouse blaming Mills for his son's death. (Arrest in Transit)

Soon after this, Mills and Brett are called to help a man injured by a fall down a back ally. However, things seem suspicious when they get there as he wasn't injured by a fall but run over and there's a vehicle blocking one of the ally's exits. Before they can load him into the ambulance, some of Lullo's men show up and kidnap both Mills and Brett. It's hours before the station notices. (Santa Bites)

In the car, Brett and Mills both fight their kidnappers causing the car to crash. Everyone survives the crash with one of the kidnappers being severely injured and in need of medical attention Mills and Brett can't survive. They're forced to try and save him without going to the hospital at gun point. Brett tells Mills to clamp where he shouldn't to let one of the captors die but neither Mills nor Brett can go through with it. They manage to escape from their captors but get themselves trapped. They're rescued by Firehouse 51 and Jay Halstead. (Let Him Die)

Sylvie was upset that Mills had chosen to go to North Carolina near the end of Season 3 and during his goodbye party, she breaks down in tears and hugs Mills goodbye.

During a call, Sylvie gets attached to a baby she delivered to a gunshot victim mother who died in the ambulance. She visits the baby in the hospital several times until Chief Boden finds out and tells her to let it go and so does Chili. However, she still goes back, where she meets Dr. Charles (Chicago Med). He tells her secretly to check the father's details while the receptionist is out. She goes to see him and tells him about the son, but he ignores her. However, when she comes back to see the baby yet again, the dad is there and thanked her.

She and Chili also help host a wedding, where she sings.

When Sylvie finds out Jimmy is leaving, she confesses her feelings for him, which she later tries to cover up when she finds out he is staying in the CFD and working alongside her as her new partner.

Both Chilli and Jimmy leave as paramedics, leaving Dawson to take their spot and work alongside Brett. During one of the cases, Gabby's brother Antonio shows up and Sylvie instantly develops a liking towards him. After some consideration, she asks him out, but he refuses, saying that his breakup with his ex-wife is still on his mind and he doesn't want her mixed up with this. She responds by saying that she doesn't mind and as a result, they start going out.

Sylvie tries harder to impress Antonio's son Diego, who likes to play chess and whom she doesn't connect with. Otis teaches her and Antonio asks her later to take care of Diego when he's suddenly called to work. She agrees and her and Diego are at the firehouse when Antonio's ex-wife, Laura, shows up abruptly and asks Diego to wait for her while she harshly tells Sylvie that she doesn't trust her and doesn't want a girl like her around her son. This upsets Sylvie and when Antonio shows up, she tells him what happened and he apologies and she adds that she doesn't want to be in the middle of his fight with him and his ex-wife. He tells her that he warned her before this, but she replies that she didn't expect to be directly confronted by Laura. He lashes out and she breaks up with him.

Antonio later shows up at Sylvie's door and apologies, but she is still angry. She later (5x12) tries to get her mind off Antonio by doing extra exercise at the firehouse, trying to find online makeup classes, and changing her look and even learning German. Dawson feels bad and tries setting her up with people Casey knows but Casey doesn't want to get involved in her love-life.

Sylvie leaves with Kyle following the boiler explosion in season 7.

Her biological mother wants to make contact and she has mixed feelings but ultimately goes to see her. After a terrible meeting with her stepfather, she is approached by her real mother Julie who apologizes for her husband's actions and reveals she is now pregnant with her second child. Shocked, Sylvie hears Julie tell her that she tracked Sylvie down because she wanted to make a connection with her before giving birth and have her in the child's life.

Sylvie spends time with Julie who is happy at getting to know her and teases her for her obvious feelings for Casey.

On Episode 18, she finds herself at the hospital with her biological mother giving birth. Unfortunately, Julie did not make it through the birth; however, the baby does. Sylvie became the older half-sister of a little girl.

Her stepfather Scott nearly forces her to care for the child or he'll give her up. Sylvie later finds Scott at the hospital outside his child's room pacing. With a talk, she convinces him to keep the child after seeing his concern for her and offers to help him. Ultimately, Scott agrees to keep the baby and names her Amelia, which was her mother's middle name. Scott announces he will move back home but tells Sylvie to visit and be apart of his sister's life.

Retrieved from "https://chicagofire.fandom.com/wiki/Sylvie_Brett?oldid=17003"
Community content is available under CC-BY-SA unless otherwise noted.