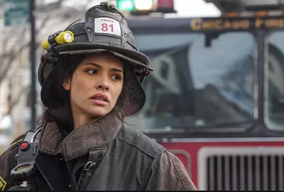 Stella Kidd is a Firefighter on Truck 81. She is introduced in the 15th episode of season 4 as a result of the closure of her former firehouse. She joins Firehouse 51, replacing Jimmy since he was a candidate and she was already a professional firefighter, thus has more seniority.

Her first appearance is in Bad For the Soul. When Kidd first arrives at the firehouse, Gabby acts as if they have problems, but it is revealed that they are old friends. She tells the house that she is recently divorced and is enjoying the single life. She goes out whenever she wants, eats at nice restaurants and whenever she's lonely she sleeps with her ex, something he is apparently fine with.

Kidd quickly proves to be a worthy firefighter and a great asset to the House.

While writing her name on her new locker, Kidd asks Dawson whose locker it was before hers as it smells like cologne. Dawson tells her that it used to belong to one of Severide's old friends, Scott Rice, which didn't end well. At the mention of Severide's name, Kidd acts suspiciously shy and "blushy", but they are interrupted by Severide, cutting the conversation in half. Severide then apologizes for "the most embarrassing night of his career" since he didn't know she was married and showed up with a six-pack at her back door. Her husband went crazy and actually wanted to press charges against Severide.

Grant shows up at the firehouse looking for Stella, saying he misses her. She then goes to the Turnout Gear room with him to administer him a B-12 shot.

In "What Happened to Courtney", Hermann is looking for entertainment for his daughter's Annabelle 8th birthday party as the guy he contracted is double-booked. Kidd tells him she knows a guy: her ex-husband is trying to start over and just needs a chance - he will also do it for free. Hermann accepts the offer and Grant takes the gig with one condition; Kidd has to give him another chance. Kidd says she still cares for him, but he has to show her that he is growing up and changing in order for her to pursue a relationship with him again. However, when the party comes he never shows up, leaving Stella to come up with a last minute entertainment plan, Molly's Jr. Later on, Stella meets Grant at his place, where he is playing music. Stella gives him the house key and tells him that it's over as he missed the party after she backed him up to people she didn't want to disappoint.

Mouch invites Stella to his wedding. She will be at a table with Trudy's friends and Severide and so tells Severide to bring his "A-game". His answer is that that's all his got, to which Kidd asks if breaking and entering is his "A-game". That's when the House realizes there's an awkward story between the two.

During the after wedding party at Molly's, the guys are all together and ask for the real story. Stella tells them that one night after a tactical training course at the academy, Severide showed up with a six-pack after using the key under the mat to get into the house. She convinced Grant to not call the police. The following day, Severide tells her he owes her a big favor.

Hermann and Kidd get into a discussion about who's the best manager. Stella states that she ran the best pub in Milwaukee for 2 and a half years. Dawson then proposes they settle things by doing the "Bar Olympics": 2 contestants, 10 events, winner takes all. Kidd wins, but instead of the money, she wants to help them manage Molly's. One of the changes she introduces to the bar are artisanal ice cubes, giant perfectly clear ice cubes that require a special machine to make, so they can charge more per drink and sell more cocktails than beer. After she convinces them to buy the machine, the House is called to a fire at Molly's that apparently started because of said machine. Feeling awful about what happened, she decides to fix the damage herself. She and Severide flirt throughout the season, and he shows up at Molly's to help her, as it is clear she can't do it alone. Kidd tells Severide she doesn't understand why, when she was married he broke into her house with flowers and champagne, but when she is finally single he keeps a distance. The two kiss and start a romance. When she is leaving the house and getting into her car, she notices a paper on her car. It's an invitation from Grant for his band's show. Grant later shows up at the Firehouse to give her her favorite sandwich and tell her about the gig, saying she is the inspiration and the reason why everything is happening.

She confides in Severide that Grant is using again and that she is worried about him. Grant shows up at Molly's as she and Severide walk in together, causing Grant to fight with Kidd once again. A while later, Grant texts Kidd. She tries to call him back and realizes he is on something. Worried that something might have happened to him, she locates his phone and the team find an overdosing Grant. At the hospital, Stella tells him that he needs help to get clean. Grant insists she is all he needs, but she is done and Grant shouts at her to leave. Kidd leaves, worried, but Dr Charles calms her down, telling her they will do their part to help him. However, some time later, Dr. Charles discovers Grant is missing from his hospital bed.

In the season finale, Kidd and Severide are shown getting into bed together as Grant sits in the dark, a knife in his hand.

Responding to a fire at a high rise apartment complex, Kidd is left severely injured. She and Hermann were extinguishing part of the fire to help Severide and a child out, who were both waiting inside a room and running out of time. Kidd ran out of oxygen, but didn't tell Hermann, and as a result, ran out of air and collapsed. She is sent to Chicago Med, where she deteriorated. Connor tells them that to save her, they would have to remove her lung, though Severide disagreed as she would no longer be a firefighter, and asked them to find another way. With some help, Connor is persuaded and tries a different surgery, which saves her life without the lung removal. She recovers quickly and is back to work soon.

Add a photo to this gallery
Retrieved from "https://chicagofire.fandom.com/wiki/Stella_Kidd?oldid=18401"
Community content is available under CC-BY-SA unless otherwise noted.