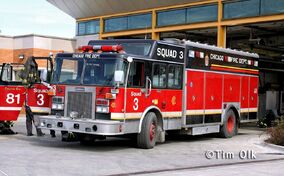 Rescue Squad 3 is the heavy rescue apparatus assigned to Firehouse 51. Equipped with specialized tools for heavy rescue, it responds to all working fires and calls requiring technical rescue. Squad is staffed by 4-5 firefighters.

Rescue Squad 3 was originally a 1989 Spartan Gladiator / Saulsbury heavy rescue truck bearing the traditional black-over-red paint scheme of the Chicago Fire Department. Prior to being used on the show, it was in service until 2003 as Unit 5-1-1 of the real life Hazardous Incident Team (HIT), which is the Chicago Fire Department's hazardous materials response team. Later on during Seasons 1 and 2, they occasionally switched between the original squad truck and a 1996 HME heavy rescue also owned by the CFD. Finally during mid-Season 2, the show received a 1989 Spartan Gladiator / 3D-Metals heavy rescue truck from the Antioch (IL) Fire Department and had it repainted for the show. The Antioch rig has been used ever since.[1]

Retrieved from "https://chicagofire.fandom.com/wiki/Rescue_Squad_3?oldid=17955"
Community content is available under CC-BY-SA unless otherwise noted.