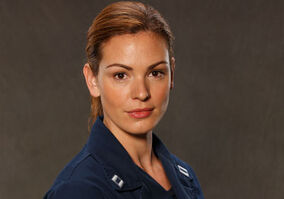 Rebecca Jones was one of the firefighters in Truck 81 at Firehouse 51.

Rebecca grew up in a household full of CFD officers. Her father is very senior in the department while all three of her brothers are lieutenants. However, her father doesn't believe that she should be a firefighter as he believes that female firefighters have no real use. Her mother died in a car crash in which she survived.

Rebecca was in the same fire training group as Gabriela Dawson and initially they bonded over being the only 2 women in the group and performed the tests and tasks together. However, their relationship soured after Gabby caught Rebecca cheating in the written test, although Rebecca later explained that she only cheated to prove her sexist father wrong, Dawson still held some resentment after she beat her in the test having scored 98%.

Rebecca had equal tension with Kelly Severide after suggesting a fellow recruit be dismissed after slowing the group down and not being able to trust if he had everyone's bad. However, Kelly instead dismissed Rebecca for not being a team player but her father had her reinstated despite Kelly's resistance.

During the final physical test Gabby and Rebecca are paired and Gabby helps Rebecca when she gets stuck on the stairwell. However, when Gabby falls and hurts her ankle Rebecca is too far gone and passes the test whilst Gabby fails by only a few seconds. Rebecca is subsequently posted to Firehouse 51 as the new candidate. (Virgin Skin)

Rebecca initially finds it hard to fit in among her fellow firefighters and does not understand the group dynamics and her place in the firehouse as a candidate and Peter Mills offers her some advice on how to fit in.

During her first call out Rebecca ignores Matthew Casey's orders and gets a saw from the truck, dropping and breaking it, Casey is furious and shouts at Rebecca for not knowing her place. Rebecca believes Casey does not like her because Gabby has been telling him things about her and confronts her in the shower room.

In A Rocket Blasting Off, Jones brings a cake to Hermann after he talks about getting a vasectomy. It resulted in her having an anonymous formal complaint being put against her. After leaving Boden's office, his assistant tells her to "have a nice day".

Rebecca begins to settle in, in the firehouse and her and Gabby overcome their differences after she helps her reapply for the next round of physical tests by asking her father for a favor. However, just as she is beginning to fit in her father orders Casey and Chief Wallace Boden to fire Rebecca so that he can put her behind a desk where he believes she will be safer. After much deliberation, however, Casey and Boden decide to ignore her father's orders and keep Rebecca on not before Gabby blurts out her father's plan and Rebecca runs away upset and betrayed, Mills chases after her and she tries to kiss him but when he rebuffs her she runs away and gets a cab.

Casey and Boden tell Rebecca that they have no intention of firing her as she is one of their firefighters and the Chief allows her to have a day off to think. She later meets Christopher Herrmann in Molly's and tells him that she is going to take the job her fathered offered. She explains her father's animosity towards her as she is a constant reminder of her mother who died in a car crash that Rebecca survived and Herrmann supports her telling her to come to Molly's whenever she needs.

At Rebecca's house she writes a letter to Dawson and leaves it on her kitchen table before walking away. Dawson later receives a call from the police telling her that they have found Rebecca's body and that she had committed suicide.

Retrieved from "https://chicagofire.fandom.com/wiki/Rebecca_Jones?oldid=14838"
Community content is available under CC-BY-SA unless otherwise noted.