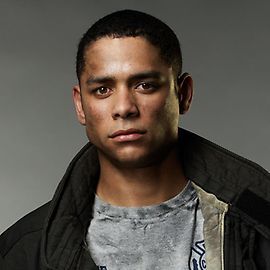 Mills' father was also a firefighter, but was killed after he and Boden rushed into a burning building against orders. His mother and sister owned and operated a diner, where Mills occasionally worked while off-duty. The diner was eventually destroyed by a fire set by Kevin Hadley. At the end of Season 1, Mills applies to the Chicago Police Department academy, suggesting that he plans to leave Firehouse 51 after finding out Boden and his mother once had an affair.

Mills was assigned to Truck 81 under Lieutenant Casey at firehouse 51, where his father Henry Mills had worked until his death in a fire during a call with Chief Boden . From then on, Mills was determined to become a firefighter, something his mother had a hard time accepting.

During his time under Casey, he develops a good relationship with Lieutenant Severide and not so much with Casey. Severide eventually wants to transfer Peter to Squad 3, which doesn't go down well with Casey and the rest of 81 as they feel he isn't ready. Peter also starts to date Gabriela Dawson.

Severide's father Benny also comes to visit 51 after he's revealed to be a former firefighter who served there with Henry Mills and Chief Boden. There's some tension between Boden and Benny about how Henry died when Benny rejects the idea of Henry dying as a hero. Boden tells him to leave and not come back. During a dinner dedicated to firefighters, Boden praises Peter for recent work, where Benny gets up and leaves midway. Afterwards, the two meet up and Benny tells Boden he knew about his affair with Ingrid (Henry's ex-wife at the time) which was the reason Henry rushed in and died. Dawson hears this. They get into a fight and Boden later tells Severide to tell Benny not to come back to 51. He does so anyway where he meets Peter who asks him persistently why he doesn't accept the story about Henry. Benny shouts at him and says Henry wasn't a hero, that he took off his oxygen mask midway the call, causing another firefighter to go after him, killing them both. This angers Mills and the others hold him back.

Peter and Dawson's relationship strengthens but Dawson holds back as she still isn't sure whether she should tell Peter about the affair. She tells him eventually and Peter breaks up with her for not telling him earlier. She's upset and heartbroken but In 1 x 23, he tells her he's willing to move on and get back if she tells him she doesn't have feelings for Casey. She's unable to and they break up.

Peter applies to the Police Academy at the end of season 1.

Antonio tells Peter he saw his name on the list and he'll soon be a policeman. However, he rejects this later on, during a mission where he ends up being trapped with Boden. He tells him that he was upset with Boden but that it was a waste of time and he shouldn't have. (No Regrets)

Gabriela later updates Mills on her new relationship with Casey. He is surprised and nervously gives her his support. He and Gabby are surprised to meet Katie Nolan, the half-sister of Severide. He and the squad enjoy her cooking, which they find delicious. Afterwards, Mills attends the surprise party for Katie where Isabella approaches him. Isabella thanks him for putting in a good word with the senator and wants to repay him with “something“. Hearing this, he decides to take her up on the offer and they head out. (You Will Hurt Him)

Mills is also finally transferred and accepted in Squad 3 after he finishes his training and courses. (Shoved In My Face)

He also has a brief relationship with Rebecca Jones while she is a candidate on Truck 81, she connects with him the most and he often gives her a lot of advice on how to cope, being the recent candidate as most the others refuse to accept her because of her cocky behavior. When she commits suicide, he is deeply disturbed by it and snaps when Hermann and the others talk about her coldly. He tells them they could've been nicer since they were always judgemental of her. Hermann doesn't take this well and the two fight for a while until Hermann admits that he saw her the night before and he wonders whether he should've stepped up and talked to her.

The season ends with Squad 3, Truck 81 and Dawson and Shay inside a broken building trying to clear the building out while Boden directs them outside. The building suddenly explodes.

Beginning with the fire at the end of season 2, they find everyone but Mills, who they later find with a broken leg. Some time later, he's cleared for duty and returns to 51.

Mills had previously asked the new transfer, Rick Newhouse, for help tracking down his family on his father's side and Newhouse found his paternal grandfather who was still alive and living in Chicago. He goes to visit them, being greeted by his (presumed) cousins very coldly. They ask for proof that he's the son of Henry Mills, but he says he doesn't have any evidence on him. His mother comes to visit him in the firehouse and tells him that Henry's family was racist and didn't want him marrying a black woman so they stopped contacting him. One of his presumed cousins comes back and says that his grandfather is willing to speak to him. However, Mills realizes he is better off without them and says that the whole family can go to hell. (Always) (Wow Me)

Mills blackouts and falls off the top of the truck, badly bruising his leg. Severide gets worried and tells him to get checked out. The doctor tells him he can't clear him for duty and that he can't be a firefighter anymore, which greatly upsets him. He later goes to visit Leonard Mills, his paternal grandfather who's bound to a wheelchair due to stage 4 cancer. He says that his grandfather gave excuses for his previous racism by saying that the times were different and couldn't come to tell him that he was no longer a firefighter.

However, with Dawson getting a candidate position, it opens up a position in Ambulance 61 as an EMT which he takes up, alongside the new transfer who took Shay's place, Sylvie. (Just Drive the Truck)

Later on, Boden tells Peter that during an arson investigation, they found that the fire killing Henry and the one on Shay were connected. They catch the arsonist in a crossover between PD and Fire and he is shot in the head and killed instantly. (Three Bells) (Call It Paradise)

Having felt better over the past few months, Peter decides to take a medical exam to see if he passes for squad again. He believes that it'll be easy to pass, but finds out that the tests to re-pass are much more extensive than what the doctor did to bar him from squad. He later finds out that he passed the medical exams and is allowed back on squad. (Forgive You Anything) (Forgiving, Relentless, Unconditional)

His sister comes to see him while he's waiting for the results to say that Leonard Mills has left them a restaurant but it's out in North Carolina. He says that he wants to stay and be a firefighter if he passes the medical exam, though his sister and mom wants to move there and open up the restaurant as their previous one was burnt down by Hadley. Originally, he is against the idea, especially as he had only been back on squad for one shift, but then he hears Scott Rice talking about taking advantage of family and he decides that he wants to be with his family, so he can live his own life rather than chasing his father's ghost.

He's adamant on his decision, which surprises everyone at 51 to the point that Casey, Severide, and Boden ask him to not make any decisions until their shift is finished. He doesn't change his mind. The squad throws Mills a going away party at Molly's where he thanks them for a great three years a firehouse 51. They give him one massive squad hug. He kisses Dawson outside and tells her that she can go to him if things ever go south.

Mills goes and unpacks his locker. He says goodbye to Pouch, looks at the firehouse, and then walks away. (You Know Where to Find Me)

After he leaves, Peter sends the house a box of treats and a photo of him and his family standing outside their newly opened restaurant. Everyone still misses him a lot.

In season 1, Mills and Dawson date. Mills and Gabriela Dawson share a love of cooking, which brings them together in the kitchen. On one occasion, they share a home-cooked meal as 'friends' which ends up being much more. The two start a secret relationship, then later on decide to come out as a couple. However, Mills breaks of knew about his mother and Chief Boden, Mills feeling as though he cannot trust her. Mills attempts to reconcile with Gabriela if she can assure him that she has no feelings for Matthew Casey, when she admits that she can't their relationship seems over for good. Even though Mills and Dawson's relationship is over, they still maintain a good working relationship and friendship. At the end of season 3, when Mills is leaving his farewell party at Molly’s, Gabby runs out and tells him he forgot something. He kisses her and tells her that she knows where to find him if anything goes wrong in Chicago.

Mills and Sylvie Brett had a very good friendship, in which they both often relied on one another since they worked as partners, Sylvie was upset when she found out Mills was moving to North Carolina near the end of Season 3 and during his goodbye party, she breaks down in tears and hugs Mills goodbye.

Mills to Chief Boden: "I don't know if my dad expected me to follow in his footsteps, I do know that he would be proud I did."