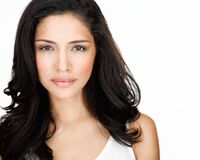 Miranda Rae Mayo (born August 14, 1990) is an American actress. They starred as Lacey Briggs on Blood & Oil and have guest starred in an episode of the short-lived NBC police series, Law & Order: LA.

Mayo was born in Fresno, California, and began their acting career appearing in the local stage productions and at their high school Roosevelt School of the Arts. She relocated to Los Angeles and began a modeling career before making her television debut. In 2011, Mayo guest starred in an episode of the short-lived NBC police series, Law & Order: LA.

In 2013, they had a recurring role in the BET comedy series The Game, and the following year joined the cast of Days of Our Lives as Zoe Browning. She appeared on the show on a recurring basis from August 2014 to July 2015. In early 2015, Mayo had the recurring role as Talia Sandoval during the fifth season of the ABC Family teen drama series Pretty Little Liars.

In 2015, Mayo was cast in the series regular role in the ABC prime time soap opera Blood & Oil as Lacey Briggs, the daughter of oil tycoon Hap Briggs (Don Johnson).

In the same year, she also appeared in the second season of HBO anthology crime series True Detective, and was cast in the recurring role of the Showtime drama series The Affair as Joshua Jackson's character's new love interest, but due to her Blood & Oil contractual obligations, she left The Affair. In 2016, she joined the cast of Chicago Fire playing Stella Kidd, the new firefighter.