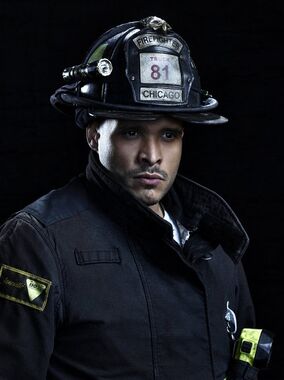 Joe Cruz is a firefighter on Squad 3 and the former driver of Truck 81. He is also a protagonist on Chicago Fire.

Cruz grew up in a rough part of Chicago, with his brother, Leon, having ended up in a street gang called the Insane Kings. He was also acquainted with Gianna Mackey and her brother Dex. After Dex got sick, Joe promised to look after his sister. True to his word after the death of Dex, Joe started to look after Gianna as a surrogate big Brother.

The firehouse is called to an active shooting where two men have been injured. One of them is Leon, Cruz's brother and gang member. He helps him to the truck and they take him to the hospital. Although Cruz offers to pick him up when he's due to be released, Leon signs himself out of the hospital. (Two Families)

He later makes a deal with the gang leader, Flaco, to get Leon out of the gang, however Flaco wants a buyout of $10,000 which Cruz refuses to give to him. During an apartment building fire, Cruz finds Flaco in the building calling out for help. Cruz takes a minute, but leaves Flaco to die and tell everyone that the building is clear in order to save his brother from the gang. (It Ain't Easy, Merry Christmas, Etc.)

Wracked with guilt over the incident, Cruz tries to confess to what he did to Matthew Casey but Casey says that he doesn't want to hear about it. He says he can either go to the police about the incident or pretend that it never happened. (God Has Spoken)

Cruz takes massive risks in order to save people, even though it's against the orders of Casey and Boden which leads to Mouch getting badly burnt. Casey tells him to hand himself into the police or that he'll do it for him. He goes to Church for help, crying through a lot of the priest's speech. Cruz comes back to hand in his badge to Casey, but Mouch forgives him and gets Casey to let him stay on. (Viral)

Cruz develops a relationship with Zoya, Otis' cousin from Russia, and eventually asks her to marry him so that she can stay in the U.S. since her work visa was expiring. However, she decides that she's going to move back to Russia because Joe wanted to marry her for the wrong reasons. She leaves without telling Cruz. (Rhymes With Shout, You Will Hurt Him)

In Season 2, against Cruz's will, Leon later took an undercover mission to take down the new chief of the gang after a little girl was killed in a drive-by shooting in his neighborhood. Leon completed the mission but for his safety, he was sent out of town to his uncle's place.

Seeing the success of the bar Molly's owned by Dawson, Herrmann and Otis, Cruz decided alongside with Mouch to be part of the project for 'Molly's II'. Cruz came out with the idea of making "Molly's II" a truck. This project convinced Herrmann and was accepted. (Wow Me)

Finding a truck was difficult but Newhouse found one at the condition to have a 20% share in Molly's II. However, they suffer from continued problems trying to get Molly's II off of the ground. Firstly, due to the truck itself not being up to regulation standard and secondly due to Cruz's cooking skills -or lack therefore- despite him being the only manning the food side of the truck. (Just Drive the Truck, Apologies are Dangerous)

Joe was the driver of Truck 81 and received a suspension from Deputy District Chief Joel Tiberg when 81 got involved in a t-bone collision with Truck 66 from Firehouse 105 in Austin since they were both en route to the same structure fire. The collision resulted in a number of serious injuries for both Truck crews. At first, he was accused of blowing a red light because he forgot the color of the traffic light and because he blew another red light 30 seconds before the accident, putting him at risk of manslaughter charges due to the seriousness of Molina's injuries. But when Molina woke up, he confessed that his Lieutenant, Tommy Welch, ordered him to beat Truck 81 so they could take command of operations at the scene. Despite being deemed not at fault for the accident, he received a three month suspension from driving the truck and was replaced by Otis. Chief Boden managed to get his suspension reduced following excellent work on the job. (Just Drive the Truck, The Nuclear Option)

Sylvie Brett decides to go to a Zumba class, choosing the highest rated one on Yelp which happens to be taught by Cruz. Cruz confronts her in the class, asking what it would take for her to stay silent and she said that she'll be quiet if Cruz allows her to teach him how to cook for Molly's II. Cruz thinks of it as a weird deal but accepts the offer, working with her to make oven fried ravioli for the Molly's II menu. (Nobody Touches Anything)

Since Cruz regularly went to talk to her about the class, Casey became suspicious and went to talk to Brett about romantic relationships inside the firehouse. To clear the misunderstanding, she revealed to him that Cruz is actually her Zumba instructor. The rumour is then spread through the entire firehouse until everyone finds out about it and everyone from the firehouse turns up to his class. (Chopper)

They finally managed to get Molly's II the permits required to open under the condition that they sell energy water -a pyramid scheme which Herrmann was involved in and said that the money was guarteed- at the stand at the Christmas market. However, things don't go well as the truck ends up rolling down the hill and into other stands. In the end, they decide to close down Molly's II, giving the soup kitchen the truck. (Santa Bites)

In Spartacus, after Scott Rice is given the boot, Chief Boden announces that Cruz received his squad certification just before the shift started and he is subsequently given Rice's spot just as a call comes in. At first, Otis is pissed Cruz did not tell him first due to the recent tensions between Truck and Squad but later congratulates him at Molly's.

When Otis is in the hospital after getting shot in the neck, Cruz is really torn up about it and even calls him Brian like he had been asking people to do.

When his high school sweetheart Delia Cantor reconnects with him on Facebook, Cruz has a small crisis trying to decide if he should accept her advances, as she is married. Brett gets mad at him because he's better than that.

Cruz married Chloe Allen in Light Things Up with Severide as his best man. The wedding is held in the "Firefighters' church" and it is attended by the whole firehouse.

In Rattle Second City, Cruz is able to coerce his friend Gianna Mackey into remaining with the CFD. Cruz shows up late and says she could pretend not to know him for her first impression. However, she is dismayed by Casey saying that Joe already told them about their relationship. Gianna also shares a moment with Gallo, though Cruz forbids Gallo from trying to make a move. Afterwards, Gianna and Brett come back from a call, he worries about her but she tells that she is fine. Later, he notices Gianna tries to talk with Gallo again but noticed that he is nervous around the observing Cruz. Joe is annoyed when Gianna decides to make further drama for both of them by making a date on the weekend.

As of That Kind Of Heat, he finds Gianna blowing off her stress by exercising at the football stadium. She soon says she is unsure on whether to stay at the house or transferring but Cruz brings up his promise to her brother and reassures her. At Molly's, Cruz gives Gianna support and promises not to be too overprotective. Gianna didn’t bring serve her interest in Gallo who is not too far from the conversation and once again Cruz voices disapproval but she is not deterred.

During Smash Therapy, Joe unintentionally makes Mouch upset by being insensitive of him failing Casey. This caused Herrmann to criticize him as he apologizes.

In Funny What Things Remind Us, he is amused by the pranks of Mouch and his rival Rutledge. During a case of the construction yard, Gianna is nearly caught in an explosion but is saved when Gallo came to her aid. Cruz thanks Gallo for saving Gianna amazed by how he risked his life to save her. While he is grateful, he still forbids him from trying to pursue Gianna.

In My Lucky Day, Chloe told Joe that she is pregnant with their child. This news left Joe pondering before the squad was called in on a case.

During Blow This Up Somehow, Joe answers a call with the rest of the squad where the gas station caught a blaze. At the house Joe was amazed to hear Gallo state how he saved the life of a victim before watching us Casey suspends Gallo for recklessly endangering himself. Later at Molly's, Joe joins Brett and Gianna where they discuss missing drugs. Joe brought up a previous case where a person tried to steal drugs from the paramedics and ask if anyone try to do that. Although Gianna denies this it did not take long for Brett to realize the previous case happened where a woman was supposedly having a seizure and they went after her most likely giving her boyfriend time to steal the drugs.

In Dead of Winter, Chloe tells Joe it's a boy.

Add a photo to this gallery
Retrieved from "https://chicagofire.fandom.com/wiki/Joe_Cruz?oldid=18435"
Community content is available under CC-BY-SA unless otherwise noted.