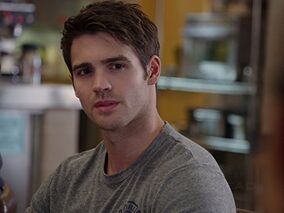 Jimmy Borrelli is introduced to the series in the first episode of the fourth season and is portrayed by Steven R. McQueen.

Borrelli starts off at Firehouse 51 as a firefighter candidate with a bad impression when his older brother drops him off. Borrelli is wrapped, tied up, and gagged with duct tape and toilet paper attached to his bare skin with the smell of beer all over him. The Chief tells him to go back home and not to return to the house. Borrelli comes back to apologize to the Chief and says he will prove himself as a candidate.

Jimmy has an older brother, Danny, on Engine 67. A few episodes into the season, Danny wanted Jimmy to join him but Jimmy refuses. Danny becomes furious and storms off. Later he shows up at Molly's and apologizes to Jimmy for his behavior and explains he was only trying to look out for him. Jimmy forgives him but explains that he will be alright. The two share a brotherly moment before Danny leaves.

In Bad For the Soul, Chief Boden informs Truck 81 that due to another closure of a nearby firehouse, teams will be expected to take on new members who lost their job. Due to the other firefighters being trained and professionals, they will be given a priority, one which candidates don't have. Casey and Borrelli are told that Borrelli will have to therefore move to another firehouse. This is until Boden offers Jimmy to stay in another company. He tells him that Peter Mills was injured and stayed on as a paramedic and since they're in need of a permanent paramedic, he can take up that role instead. He instantly agrees.

In Where the Collapse Started, Danny comes over and asks Jimmy for some help with a bar deal. But after Jimmy finds out what's really going on, he refuses. Danny becomes angry and leaves. Later, the house gets a call for a structure collapse where Truck 70 and Engine 67, Danny's company, are already on scene. Danny goes into the building along with Truck 81 and Squad 3 and ignores Jimmy. After the firefighters find and evacuate victims with the building crumbling around them, Severide reports to Chief Boden and he gives the order to evacuate. But Danny believes he heard someone still call out and asks Boden to bring the victim out so he is given one minute. But the roof collapses moments later and Jimmy rushes in. Upon arrival, Jimmy requests Squad assistance for extrication since Danny is pinned but Boden is hesitant. Boden himself then goes inside and pulls Jimmy back just as more debris falls on Danny, killing him. Outside, firefighters, paramedics, and cops line up to form an aisle leading to Ambulance 61 and salute as some firefighters bring out Danny's body and Jimmy leads the way to the ambo. Jimmy then takes some time off after this incident. The next evening, Jimmy shows up at Casey/Severide's apartment and tells Severide that he believes Boden made a mistake by giving Danny one minute that he didn't have. He then storms off after Severide tells him to cool off.

In The Hose or the Animal, he files an official grievance against Boden.

In A Real Wake-Up Call, all units are called to a multi-vehicle collision. One of the vehicles involved is a truck carrying petrol ready to explode. Jimmy wants to help a victim in another car but Boden orders him to stand down. Jimmy, however, refuses and approaches the truck just as it explodes. The fireball engulfs Jimmy and he suffers severe burns to the left side of his face. Later in the hospital, doctors reveal that they were not able to save his left eye, thus ending his career as a firefighter. He is never seen again after this incident.

Jimmy starts a relationship with Chili.

The two start off as good friends until Chili kisses him and they start dating. They enjoy themselves until the house comes under inspection during when Dallas Patterson briefly replaced Chief Boden. Seeing their carelessness around and about the house as they spoke to each other, Casey saw their behavior as being too 'free' with each other and told Jimmy to dial it down until they were off the radar. Jimmy tells this to Chili but she doesn't listen and Patterson warns them on their inappropriate behavior. Jimmy immediately backs off but Chili continues to remain carefree, causing him to break up with her. Later on, Jimmy tried to be friends with her but she snapped at him and Sylvie. He leaves it as that and although worries slightly, leaves her alone.

When Sylvie hears that Jimmy is leaving 51 in Bad For the Soul, she admits to having a thing for him since he started there. Once Boden offers to keep Jimmy on as a paramedic like he previously had with Peter Mills, Sylvie asks him to forget that she had said anything since they will both be working on the ambulance together.

Add a photo to this gallery

Retrieved from "https://chicagofire.fandom.com/wiki/Jimmy_Borrelli?oldid=18747"
Community content is available under CC-BY-SA unless otherwise noted.