Start a Wiki
watch 02:07
'Chicago Fire' Profile: Jeff Clarke
Do you like this video?
Jeff Clarke 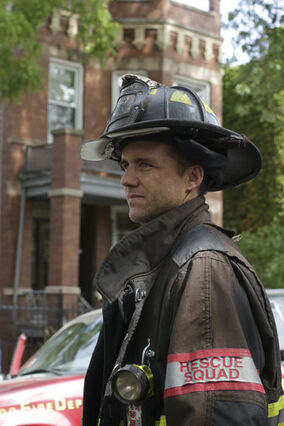 Jeff Clarke was a Fire Lieutenant at Firehouse 33 and a former member of Firehouse 51. He got injured on the job so decided to enroll in med school. He is introduced as a 4th year medical student during Chicago Med's season 1 finale

Prior to becoming a firefighter, Jeff was in the Marines and was stationed in Iraq. He then worked at Firehouse 33 on the relief team and then transferred to Firehouse 51 where he was promoted to squad.

Following the closure of his firehouse (Firehouse 33) during Gail McLeod's reorganization of the department, Clarke was reassigned to Firehouse 51 and put on Rescue Squad 3.

McLeod attempts to appeal to Jeff's sense of authority by asking him to be a snitch on Firehouse 51, but Jeff does not want to do that. (A Problem House)

Firehouse 51 realizes there is a snitch when McLeod appears to be aware of all of the goings-on at the station including a child going on off-limits equipment, Casey leaving his post for personal reasons and Otis displaying interest in doing the cinnamon challenge. Herrmann originally suspect Jeff of being the snitch since he is new to the house and quiet. (Prove It)

Jeff reveals to Peter that McLeod asked him to snitch on the station for her, but that he refused to. Mills later accuses Lieutenant Spellman, the other firefighter who came over from Firehouse 33, of being the rat and he confesses to it. (A Nuisance Call)

Lisa, his ex-wife, comes to visit him at the station with the hopes of reconnecting. He says that she left him when he needed her the most while she says that she was treated like garbage by him. Later on, Clarke goes to visit her to apologise for his behaviour and hopes to reconnect with her. (No Regrets)

Jeff's relationship is complicated as Lisa began to date another man, Hayes, while they were separated, who comes to collect money she owes him. Clarke is unsure about the relationship and confides in Herrmann after snapping at him, believing that Lisa is sending him mixed signals. (Rhymes With Shout) (You Will Hurt Him)

Hayes turns up at Molly's, calling Lisa a whore for not repaying the money she owes him. Clarke explodes and says that he should get out or he'll kill him when he nexts sees him. The following day, Antonio comes to the station and speaks with Clarke to ask if he threatened Hayes as his friends claimed he did. Clarke says it was just an argument but Antonio says that Hayes is dead. The bullets which killed him matched a type of gun which Clarke owned and he was arrested on suspicion of murder. (Not Like This)

Clarke is released on bail, but isn't helping out with the investigation which is making it look more and more like he did it. Antonio Dawson and Jay Halstead give Peter Mills access to some of Hayes' texts which show that money was never owed, Hayes was around because Lisa wanted him to be, and that Lisa got jealous when she found out that Hayes was cheating on her. Clarke gets angry at this revelation and then goes and talks to Lisa about it. He goes back to Jay with a receipt from the diner he was eating at at the time of the murder saying that he was trying to protect Lisa. (Shoved In My Face)

All the charges is dropped and Clarke is seen back in the firehouse. (Out With A Bang)

During the blackout, Clarke is sent by Cruz to get meat and beans from a local shop. The shop is attacked by thugs who stab the owner and Clarke manages to scare them off with a baseball bat which he gets after the thugs attack him with it. Clarke applies pressure and antiseptic to the wound using make-shift supplies found in the shop, saving the life of the shop owner. The thugs reappear with back-up, they threaten Clarke who defends himself with a baseball bat while they have guns. However, the police appear which scare the thugs away before they do anything. (Tonight's The Night)

Later, following the kidnap of Katie, Clarke agrees to help Severide get vengeance on Vince despite his previous legal troubles. (Tonight's The Night)

Jeff transfers to a firehouse 25 following his promotion to lieutenant. (A Heavy Weight)

Jeff harms himself while on the job which prevents him from being a firefighter, leading to him turning to medicine and appearing at Chicago Medical Centre as a student doctor. Severide has to get checked out for a nasty mark on his neck and Jeff asks him if he's a registered bone marrow donor and asks him to get checked, since they have a patient who's struggling to find a bone marrow match but has ancestry from the same region of Norway as Severide. (One Hundred)

Jeff is introduced as a medical student at the end of the first season of Chicago Med. He has a short relationship with Natalie Manning, a doctor who is a widow of one his friends in the military. After he finishes medical school, he chooses a residency in emergency medicine in Maui, Hawaii and leaves fairly soon after.

Mills was the first acquaintance of Clarke's in Firehouse 51. He was also the one who cleared Clarke's name as the Mole. Their friendship then continues to develop, and there are many occasions it is exhibited, such as when Mills goes to Clarke's house to convince him to turn Lisa in in Shoved In My Face.

Add a photo to this gallery
Retrieved from "https://chicagofire.fandom.com/wiki/Jeff_Clarke?oldid=16601"
Community content is available under CC-BY-SA unless otherwise noted.