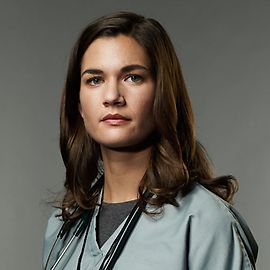 During the course of the subsequent investigation, Antonio Dawson tells Casey that Hallie was murdered when she was struck on the back of her head prior to the fire. It was later revealed that the person responsible was Timothy Campbell, who was later fatally shot by Voight

Hallie had an on-and-off relationship with Matthew Casey for 8 years. They were engaged, however she broke it off. They later reconciled when Casey asked if they could start fresh. Later, Hallie informs Casey that she doesn't want to have children. Because of this, they break up again and she moves to South America.

When Hallie comes back, she and Casey reconciling their relationship as the begin to realise how much they missed each other, just before Hallie is killed in

(To Casey about Mills and Dawson) "That sneaky little bastard" 1x21

Add a photo to this gallery
Retrieved from "https://chicagofire.fandom.com/wiki/Hallie_Thomas?oldid=15012"
Community content is available under CC-BY-SA unless otherwise noted.