Chicago Fire Wiki
Register
Don't have an account?
Sign In
Advertisement
in: Clean Up, Characters, Main Characters,
and 4 more 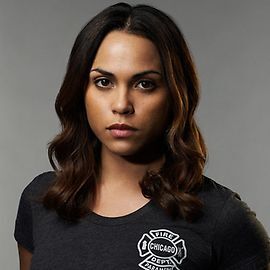 Gabriela Dawson was a Paramedic on Ambulance 61 and the former Candidate of Truck 81. Gabriela was the wife of Matthew Casey. She was one of the main characters of Chicago Fire as a paramedic in charge (PIC) on Ambulance 61. She is now assigned to Puerto Rico to help give medical attention to the needed.

Gabriela Dawson is the daughter of Ramon and Camila Dawson and the younger sister of Chicago PD Intelligence Unit detective Antonio Dawson. She tends to quickly lose her temper, a behavior regularly getting her in trouble with her hierarchy.

During the first two seasons, Dawson was the Paramedic in Charge (PIC) of Ambulance 61. In Season 2, she was accepted to the Chicago Fire Academy, where she initially failed her physical agility test by several seconds after spraining her ankle. While at the academy, she met Rebecca Jones. Dawson caught Jones cheating during a written examination and took a disliking to her. Jones eventually graduated from the academy and was assigned to Truck 81 as a firefighter candidate. The two started to get along after Dawson discovered that Jones' father, a chief officer, was against her career choice and wanted her transferred to an administrative position. When Jones committed suicide, she left a letter to Dawson, who was deeply affected by it.

After making a call, Casey is successful in getting Dawson readmitted to the academy to retake her physical agility test. In Season 2, she graduated from the academy and was assigned to Truck 81 as a firefighter candidate. She completed her candidacy on 81, and then became a firefighter. After taking in her foster son, Louie in Season 5, she decided to transfer back to the Ambulance.

She co-owns a bar called "Molly's" with Christopher Herrmann, Otis, and Leslie Shay. After saving the precedent owner from a fire in the bar, Herrmann came up with the idea of buying the business and looked for co-owners. Otis and Dawson accepted to join on this project. They soon discovered that the place came with a passive associate, Arthur. He wanted at first 25% of the benefits but Herrmann managed to lower the new associate's part to 1%. Arthur is revealed later to be a mobster under the watch of the undercover detective Jay Halstead. Knowing at first neither his undercover assignment nor his relations with Arthur, Dawson started a romantic relationship with him until he decided to join the Intelligence Unit. In season 4 Dawson saves a boy Louie in a house fire and she wants to foster him, which causes tension between her and Casey. In Season 5, we see them happily enjoying family life together. In the episode "One Hundred", Casey and Dawson get married. In Season 5 Dawson and Casey see their foster son taken away and Dawson takes back Ambulance 61. They get divorced when Dawson leaves for Puerto Rico.

She had a close friendship with her co-worker Leslie Shay. The two have been seen together often and are one another's support both on and off the job. This relationship takes a turn in the second season after a traumatic case caused Dawson to "accidentally" blame Shay and it sends her into a self-destructive phase in which she pursues a party-hard woman that she met at a party.  Shay stops communicating with Gabriela and even goes so far as to transfer out of Firehouse 51. However, Dawson tracks down Shay after she spirals into depression after a tough case and they rekindle their friendship. In the season 3 premiere Shay dies during an explosion from a head injury at the scene. She's deeply upset and disturbed by it which isn't initially shown until it's revealed that she's been going to the department's psychologist for a month. She reveals that she told Shay to switch places with her just before the explosion so Shay could get some PIC experience. She feels extremely guilty that if she hadn't told Shay to take her place, she wouldn't have died.

Her past relationships included Jake (probably Cordova), who cheated on Gabby with his highschool girlfriend, Logan, whose parents couldn't approve of a latino, Dr. Mike, who was about as romantic as a German teacher, and Jay Halstead. (in reference to Trading in Scuttlebutt)

She shares a love of cooking with Peter Mills. The pair share a home cooked meal, supposedly as friends, but it turns into something more. In the 'morning after' scene, Mills says that he won't tell any of their colleagues, because what happened was between them only. They appear to continue the secret relationship, as Gabriela comes to like Mills more and more. Then Gabriela decides it is best if the two come out as a couple. They break up later on when she tells him about the affair between Boden and his mother since she didn't tell him for a long time despite knowing. They break up for good when Dawson is unable to tell him that she doesn't have feelings for Casey.

At the beginning of the series, Dawson had a huge crush on Matthew Casey. Gabriela often shares what has been deemed 'eye-sex' with Matt and there has been speculation about their feelings for one another. This relationship comes to a semi-climax at her family Christmas party, to which Dawson brings Casey as a 'casual' date. He appears to have shown interest in her only to kiss her on the cheek when she goes to kiss him.

Later on, in season 2, the two reconnect when Matt realizes his feelings for her. He turns up at her door one night and spends the night. After this, the two enter into a relationship. However their relationship enters trouble when Dawson trains go become a firefighter, before completing her training she realizes she will not be allowed to work under house 51. As Dawson prepares to transfer out of the house, on her last shift as paramedic, Leslie dies and her death causes Dawson to stay on as a paramedic for 6 weeks extra. Their romance progresses and Casey eventually asks Dawson to move in with him. They start looking for apartments but Dawson is dragging her feet.

In Real Never Waits, Casey proposes to Dawson at Boden's wedding. She doesn't have time to answer because a call comes in. He proposes again to her and she accepts. They can't get married and try to hide their relationship since Dawson works under Casey as a candidate and she can't be married to the leading Lieutenant.

In the Season 3 finale, it is revealed that she is pregnant with Casey's baby. At the beginning of season 4, Dawson experiences pains in her lower abdomen and is rushed into hospital. Matt meets her there and supports a confused Gabriela. The latter is rushed to surgery and Will Halstead informs Matt the pregnancy is not viable and that the baby doesn’t have a chance. When Gabby comes around, Matt proceeds to tell her this information. However, she doesn't seem fazed. It is shown that there is a problem with the surgery and a second one is needed to fix the mistakes. When Gabby comes around a second time this time realizes what had happened she breaks down and Matt supports her. In season 4, at the mid-season finale it is shown that Casey and Dawson are engaged and are more in love than ever. In Season 5, Dawson and Casey get married in order to make the adoption of their foster son, Louie, more credible instead of crediting Dawson as a single mother. They subsequently give up Louie to his real father. In Season 6, Casey is honored in a ceremony. He is shown to have survived the building fire. Towards the end of season 6, Dawson tell Casey she wants to try having children again. They do not divorce when it is discovered that Dawson has an aneurysm from her first pregnancy and therefore could die. She subsequently leaves in Season 7.

In season 8 Dawson makes a brief return for the mid-season finale, and invites Casey to visit her in Puerto Rico on his next furlough. 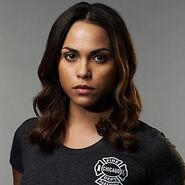