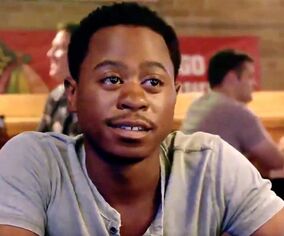 Darren Ritter is a firefighter candidate that is originally assigned to Engine 37. After he freezes up on a call, he gets kicked off Engine 37 and floats for a while before deciding to leave the CFD. However, after talking with Randall McHolland and accepting an offer from Lt. Christopher Herrmann, he joins Engine 51 and has been there ever since - except for the beginning of season 8 when he is a temporary replacement for Brian Zvonecek on Truck 81 after Brian is killed in the mattress factory fire.

Ritter breaks up with Eric after quarantining together. Ritter says it was "too much time together in a small apartment". Herrmann sets him up as soon as he discovers that Ritter is single. Andy (the blind date) is, however, a possessive narcissist who dated Eric before Ritter did. He makes some nasty remarks concerning Eric, which instantly urges Ritter to come to Eric's defence and storm out of the date. Fortunately, Eric learns about this incident and makes up with Ritter.

Retrieved from "https://chicagofire.fandom.com/wiki/Darren_Ritter?oldid=18431"
Community content is available under CC-BY-SA unless otherwise noted.