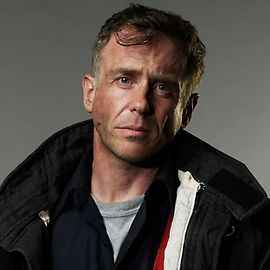 Lieutenant Christopher Herrmann is a firefighter and the company officer for the second shift of Engine 51. Herrmann is a self-described "general entrepreneur", he currently co-owns a bar called Molly's with Mouch and Trudy Platt.

Christopher is married to Cindy Herrmann jennafogleman]], and at the beginning of the series, they have four children; three sons, Lee Henry, Luke, and Max, and one daughter, Annabelle. Cindy is noted as being a devout Catholic and is adamantly against using birth control. After backing out of the limousine business he'd attempted to start, he reveals to everyone that after the first time they've slept together in six months, she's expecting their fifth child, another son named Kenny James Hermann, who is born during the Season 1 Finale. Cindy experiences some complications during labor and ends up giving birth via an emergency C-Section, during which time, Christopher is being held hostage with a knife to his throat by an inmate at the Cook County prison following a riot. He makes it through the ordeal uninjured and makes it to the hospital, where he gets to meet his son for the first time. At that same time, they ask Shay and Severide to be Kenny's godparents. [JennaClaireFogleman]

He shows great love and care towards his wife and children up to the point that it makes him quite upset and depressed when he comes across child-abuse cases.

He also developed a near father-daughter relationship with Chili in season 3 as he immensely helps her design her dads business idea, helping to fund and create it. The relationship greatly fades away by Season 4 as she breaks away from him and the rest of 51 after her sister's death.

Jennafogleman== Season 1 == At the beginning of the series, Christopher and Cindy lose their home to foreclosure and end up moving in with Cindy's parents, which Chris himself describes as being "two bedrooms shy of unbearable". Herrmann is severely injured when a floor collapses, dropping himself and Matthew Casey down from the third floor. His ADSU sounds, alerting the other firefighters of his location, and warning them he hasn't moved. He recovers and is back the next episode.

In an attempt to get his family into another house, Christopher makes several attempts to start his own business, until finally Cindy convinces him that the hassle he's putting himself through isn't worth it. She suggests that instead of looking to purchase another house, they rent. They end up taking a unit in a complex where one of Cindy's co-workers lives. "We'll make it our dream home." Cindy tells him.

Herrmann decides to open a bar close to the firehouse. He pitches the idea to the rest of Firehouse 51. They are all hesitant except Otis, who agrees to join, and Dawson, who also jumps in quickly following a rocky relationship with Mills at the time. However, they all go through a tough time dealing with their bully 'silent' partner who wants more shares. However, he stands up to him and tells him he will only get less than 1% of the profit, to which the partner agrees and leaves them alone. While renovating, they find a box with an army medal. They track down the owner at a care home, a nice and caring old man. He tells them about his wife who passed and Dawson asks her name. They name the bar after the wife, Molly's.

Cindy has their fifth child in the last episode of season 1 after going through some complications, making Herrmann very happy.

Herrmann, Dawson and Otis have troubles with Molly's when another, bigger, bar opens up across theirs on the main street - attracting all the attention. Their business suffers badly as all the customers end up going there instead of Molly's, including Cruz. Things worsen when Arthur, the silent partner, shows up. He asks for his share but they don't have anything.

A week or some days later, the bar opposite Molly's burns down all of a sudden. Initially, Herrmann is questioned since the bar was competing with Molly's. Meanwhile, Molly's gains publicity and attracts all the new customers. Arthur visits again during rush hour and demands his share. The 3 tip over a few notes and cents from a cup onto the table, insulting him. They tell him it is his exact share of what he gets, which angers him. He tells them he's going to get 50% from then on and expects to be paid all the money the next time he comes. When he comes by later, the 3 don't have his money and this angers him - he smashes a chair at them, damaging the interior. Throughout this, Dawson has met a guy who she then found out was working for Arthur, who she then found out was working for the CPD in trying to catch Arthur for illegal activities. He comes with Arthur for the last time when he demands for his money again while Dawson is working alone. She refuses and he sets fire to the counter, helping them arrest Arthur for good and leaving Molly's open and good.

When Rebecca Jones joins firehouse 51 as the new candidate, her cocky behavior doesn't sit well with any of the members. However, it's revealed that he father is constantly trying to stop her being a firefighter and shutting down all of her ambitions, which eventually drives her to suicide. Herrmann and Mills get into a heated argument following the cause of her suicide. Mills accuses Herrmann and the others of being uncaring and inconsiderate, which Herrmann fights against until revealing his guilt in that he saw her the night before and wondered whether him saying something to her would've changed the outcome. They get past this together.

Herrmann and Dawson also have tensions between them when she reveals she's going to be a firefighter at the end of season 2 from a bad experience with a female firefighter. When she finally passes her physical exam and becomes a candidate, Welch rejects her from Truck 66 and quickly recruits a male candidate, which upsets her so Boden overlooks her and Casey's relationship and lets her be the new candidate at 51. This doesn't sit well with Herrmann as Casey makes a habit of overlooking all of her mistakes, forcing him to do the same and not question her. She reveals afterwards that she's deliberately making mistakes like leaving things open to test him and wants him to correct her otherwise she won't learn. He's happy to hear this and takes her under his wing to train her, sometimes too vigorously but he has the best intentions and shapes her into a great firefighter.

Herrmann also helps Chief Boden when his newborn son is in critical condition after being born.

He also goes through a period of difficulty and darkness after a call reveals that a father smoked drugs in front of his baby son and was eventually the cause of his unfortunate death. He gets furious seeing this, having 5 young kids of his own, and goes after the father. The father is arrested and Casey helps to calm Herrmann down.

Later on, Otis and Cruz join Herrmann in his 'Little League' idea of recruiting young children to play Ice Hockey. Herrmann eventually realises Luke, his son, is no good and benches him after Cruz and Otis point it out but he didn't want to. To his surprise, he doesn't actually want to play and happily benches himself.

When Chili joins 51, despite the at-the-time cold welcome, she tries to make friends but doesn't have a lot in common with the others. This is until she reveals she's in-midst of creating and designing a button on the side of beverages to cool them instantly in 5 seconds. Being a business investor, Herrmann immediately jumps in and tells her she can sell it at Molly's as soon as she's finished. He helps her a lot until Sylvie and Dawson tell him to calm and slow down since Chili's spending all of her money on it without leaving any to pay her bills. He says this to Chili who thanks him for his help, saying Herrmann reminds her of her own father who died but created the idea in the first place. They get emotional and he says he will be right with her.

Herrmann and Cindy gave Chili Molly's funds to help her idea, for which she is very thankful. They then celebrate their success when she finishes her design and test to see that it works, which it does. However, she's left deeply hurt and upset when they find that someone else has already created and launched it on TV. She cries but Herrmann tells her she will definitely come up with something else and hugs her.

After Captain Patterson, then chief, tells Cruz to tell Freddy he can no longer come to 51, Herrmann happily offers him a job at Molly's to get him out of the gang life he wants to escape. He's friendly towards him.

Otis tells Freddy during a shift to get him a ball cup which is He goes searching for it and Herrmann walks in. Freddy is searching for the cup and Herrmann asks him what he's doing. After telling him, Herrmann says 'fat and short just like you' as a joke. This irritates Freddy, who tells Herrmann to take it back. He refuses and says 'we all insult each other'. This doesn't comfort Freddy, who in a matter of seconds, takes out a dagger and stabs Herrmann in his waist. He drops to the floor and Freddy escapes.

The doctors reveal that he's lost a lot of blood and it would be difficult for him to pull through. Things heat up between Rhodes (Chicago Med) and Severide after he accuses him of not treating Herrmann properly after Halstead (Med) says something about this to one of the others. However, he pulls through and is back to 51 soon. Although, the encounter leaves him with a shaky feeling and he is constantly on edge his first shift back - constantly worrying about Cindy and his kids even though he tries to hide this. He also tells Cruz not to mention Freddy to him again. He makes a statement against Freddy in court.

Freddy's father, also in prison, requests Herrmann to see him. Cruz tells him not to and he says he won't but ends up going. He reveals that he used to beat Freddy and is the reason why he is the way he is. This makes Herrmann sympathetic and with his lawyer, he retracts his statement and they let him out with watch. Cruz helps him through it.

Hermann as well as other members of Truck 81 report their concerns about Jimmy Borelli to Boden. he is in attendance at Matthew Casey and Gabriela Dawson's Wedding. many other storylines include him dealing with Lee Henry, continuing to operate Molly's Bar, etc. in the Season 5 Finale, he is seen performing CPR on Mouch, who appears to be having a heart attack.

Hermann, as well as the rest of the firehouse fully return to normal lives. luckily and surprisingly, he survives the fire that ended Season 5.

During a charity picnic, Chief Boden makes an announcement and promotes Hermann to Lieutenant and places him in charge of Engine 51 to replace the retiring Lieutenant.

Add a photo to this gallery
Retrieved from "https://chicagofire.fandom.com/wiki/Christopher_Herrmann?oldid=17694"
Community content is available under CC-BY-SA unless otherwise noted.