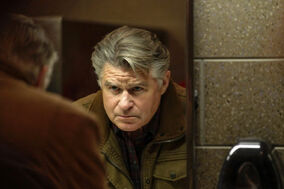 Benjamin "Benny" Severide is Kelly's father and former firefighter who served with Wallace Boden on Squad 4.

He was also a former Captain in Arson Investigations. In Season 2 Gail McLeod plots a way to overthrow Chief Boden and recruits Benny to see if he will command 51 he accepts but then he backs out realizing his friendship with Wallace. In Season 7, Benny suffers a stroke and dies.

Add a photo to this gallery
Retrieved from "https://chicagofire.fandom.com/wiki/Benny_Severide?oldid=14773"
Community content is available under CC-BY-SA unless otherwise noted.